I have to admit I've encountered that dreaded first creative block a week ago. It was awkward and made me lose my mind. Kind of like when you run out of delicious cheese and resort to putting fried onions on your sandwich instead.

Fried onions taste like cheese right? AM I RIGHT? ...

Eventually I got off my bony ass and bought this cinnamon coated crumbling gouda. It was like a choir singing in perfect tune. Never really happens but when it does, you go into a trans and freak people out.

Anyways we should move on to a more interesting topic:

Yes. Such a thing can exist.

I believe, in a world of music, one cannot completely commit to one genre for listening purposes. It is impossible. In fact, I can bravely say many of my classical friends are having a harder time appreciating popular music these days. I sometimes find them in the corner listening to Queen Bey with a shameful look. Bless their hearts.

Not so long ago, I asked my classical friends to express their views on listening to popular music. Here are some of their responses:

"I see over utilized convention after over utilized convention. I feel a little sad that most of the listeners will not recognize this. It's a little bit like walking through suburbia - Copy, paste, loop, insert lyrics here. It's just so formulaic. You could also say it's like waking up one day and only being able to see in black in white, after being so used to seeing in color."

"That self-proclaimed "music" fans and experts alike usually only know small ensemble works often consisting of a maximum of 3 types of instruments (guitars, drums, vocals) is a testament to the music industry's success in turning an art form into packaged cattle feed."

"It's all part of a complete musical diet; Brahms, Schubert, Debussy, and Bach are like the meat, potatoes, veggies, flavours and spices that sustain my brain, heart, body and soul. Then we have Kesha, Kanye, and Beyonce that act as the ice cream, junk food, beer, and pizza. These guilty pleasures are also very important in helping us express our humanity and can be very enjoyable, but as for me, I think it's healthier to experience them in moderation."

"I dig the fact that there are people who know, essentially, that writing the pop songs of today is formulaic and simple.Albeit, I do dig some solos thrown in from well-known session musicians... Glass half full I guess."

"General rage, but I tend to shut my mind off when I listen to that crap." No love. Ouch.

All of these responses have very good arguments. Anyone up to challenging these statements? Voice them in the comments section!


To me, the need to satisfy my classical and popular music tastes, is to find a middle.
Here are some elements I listen for in popular music:
- Musical diversity and originality in chord progression and melody. No one wants an album where the majority of songs are in the same key and chord pattern resulting in a very predictable and monotone experience. Surprise us!
- I may be biased in saying this, but you practically win me over when the use of any classical instrument is implemented in a song properly.
- The passion to be vocally versatile without going into overkill.
- Mashups. I hate mashups. Create your own tune without borrowing from another to enhance the quality of your song. Again, surprise us!
And so begins my own list of artists who have truly proven themselves (to me at least) to stand out in the crowd as music innovators, blending classic elements into their own.

What separates these artists from the others is their passion for telling an incredible story. A story in which the goal is to move and surround you completely.
When it comes to the artists below, I completely immerse myself in the music. Kind of like this:

Why I love this so much: Woodkid's use of instrumentation in all his singles are so powerful and raw. Not only does he direct many of his videos (like above), he also collaborates with notable composers such as Max Richter, Gustave Rudman and Phillip Glass. Truly, truly an incredible artist.


Why I love this so much: The video above is one of their best singles. This album is so atmospheric that it leaves you completely surrounded with feel good emotions. It gives you the impression that you are well...dreaming!  The strings and saxophone mixed in with electronic sounds leaves a feeling of being in your own imaginary movie. Well done, Sir.

I should also mention that a world renown a cappella group named Chanticleer performed an arrangement by Steve Hackman for the M83 song "Wait". I heard this live and was reduced to tears. You can listen to it here:


Artist: Lana Del Rey
Album: Born To Die Deluxe Edition
Notable songs: Way too many to name
Discovery: When "Summertime Sadness" was a hit on the radio.


(Just so you know, this video has explicit content)

Why I love this so much: Lana...oh Lana. One of the biggest influences in music for me. The only way I can describe her music is a blend of Cinematic Sadcore and Hip Hop. Her vocal range is also pretty darn expansive and I can enjoy the fact that she doesn't have to go on a descant rampage to make her vocal statement.
Lana has also been described as the modern day Nancy Sinatra of 1950's Americana.
Her short film Tropico (above) is just another example of her brilliance.


Why I love this so much: One of my most recent groups to join the band of music innovators. These Swedish siblings are nuts. The electronic music they compose is really different from any group I've ever heard. The meld of voice changers and insane sound effects will blow your mind. I should also mention that they co-wrote an opera called Tomorrow, in a Year... to say this opera is "experimental" would be an understatement.


Artist: Arcade Fire
Album: Reflektor, The Suburbs
Notable songs: Too many to name
Discovery: Muchmusic when it was good.

Why I love this so much: Régine and Win. Need I say more? You already knew this was coming. This Electro-Indie Rock group has won basically every freakin' music award in existence. I saw them live in April and it was just a huge costume party complete with sequins and homemade robot heads. Great artists, great versatility and great use of instrumentation.

Other honourable mentions are:

And to end this post, I leave you with this: 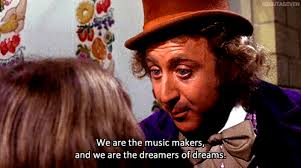